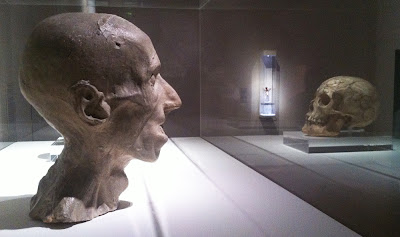 What is Critical Writing?

This post takes a page from the book Art Critiques: A Guide. The picture is one of the copies of Kant's death mask.

The idea here is to ponder the relation between "interesting" or "experimental" writing on art and "critical writing." The expression, critical writing, has a constellation of associations, mostly around critical theory and criticality, but I begin with the list from Art Critiques: A Guide.

A. Criticism.
First there is plain ordinary criticism, as it is used in everyday conversation: it means judgment—often personal, often negative. Criticism in this sense is the activity of finding fault and giving praise. This narrow but common sense of the word inflects the other five.

B. Art criticism.
This is the subject of a mountain of books. If you take a class in the history of criticism, you will probably read a Greek text (Pliny), a Renaissance text (Vasari), Enlightenment texts (Winckelmann, Diderot), Romantic texts (Baudelaire), and modern texts (Greenberg). It is not clear that these authors comprise a single tradition. Today no one writes like any of them, so art criticism is not a subject with a normal history: it seems to reinvent itself every couple of decades. There is also no agreement about whether an art critic should judge art or not, and if she should judge, what kind of judgment is best. There is also no agreement about whether the texts written for commercial galleries or newspapers should count as criticism. The whole subject is in massive disarray, and for me that makes it as fascinating as critiques themselves.

C. Critique, and “crits.”
They’re the subject of this book, but “critique” also means an activity that is more rigorous than simple everyday criticism, but less constrained than Kritik. People in art schools say “crits” as much as they say “critiques,” and I could have titled this book Art Crits. But I have never liked the term: it’s like a nickname, but nicknames should be for things and people we know. I don’t think anyone understands critiques very well. Also, “crit” sounds a bit rude, and that implies that it’s making fun of the institution, or having fun with it. But how can you know how to make fun of something you don’t understand?

D. Kritik.
A Kantian philosophic critique is an analytic inquiry that attempts to find the rational conditions under which something might be known. Kant’s critiques were meant to discover the “categories of thought,” the ways that we can perceive and understand the world. It is helpful that there is a proper term for that kind of critique: Kant’s own term, Kritik. Very rarely, an art instructor will mean Kritik and not just critique. In an art critique setting, Kritik means the attempt to see what makes a given practice possible, or what can and can’t be known about the practice. It is therefore rigorously non-judgmental: it’s not about evaluation, but understanding.

E. Critical theory.
The expression has a range of meanings in academic life, including social theory that draws on Freud and theories of literature. In the art world, it is usually applied to the work of the Frankfurt School and especially Adorno. In that context it implies a concerted, philosophically informed inquiry into the social conditions that give artworks their meaning and value, with a special interest in the avant-garde. In art schools and departments, there are instructors who specialize in Frankfurt School theory, and who seek to apply it to art in preference to other kinds of critique and criticism. The UCLA Program in Experimental Critical Theory has a "manifesto," which defines "critical theory" this way:


Critique questions the assumptions of the generalizations elaborated by theoretical projects, asking what remains undisclosed or unthought in their concepts and practices. Hence the phrase “critical theory” here is meant to describe both the attempt to generate common frameworks and the self-critical moments that must accompany any theoretical project, bringing it to bear on the conditions and limitations of its own possibility.

This makes "critical theory" an amalgam of "theory," understood as "the movement between particulars and universals, the attempt to bridge differences and create new alliances"—that is, as an enterprise that bridges or connects—with "critique," understood as a limiting process. It seems to me this combined definition avoids the necessity of describing "critical theory" itself, by relying on simple senses of both "theory" and "critique." It's also not clear to what extent the expression, "critical theory," ends up leaning on Frankfurt School philosophy.

F. Criticality.
This generally means artwork that is reflective and oppositional with respect to constructions of power. Art that does not possess criticality may be considered to be recherché, conservative, rote, uninventive, conventional, or disengaged from questions of institutions, identities, and historical contexts. An uncritical artwork might be a flower painting or a landscape. Projects that engage criticality include the Yes Men, the Critical Art Ensemble, and the many extra- academic collectives studied by Greg Sholette. The theorist Irit Rogoff proposes criticality as the third stage of critique, after criticism (her name for what I have labeled as A, B, and C) and philosophic critique (which would include what I have labeled D and E). The art historian Hal Foster has proposed criticality as a third stage after modernist judgments such a Greenberg’s and minimalist positions such as Donald Judd’s (which are about interest, not quality), and before the current fourth stage, which might be about beauty.

"Critical writing," in this expanded context, would ally art history (and other disciplines that produce texts about art) with three divergent discourses: the social discourse of the Frankfurt School; the logical inquiries of Kantian philosophy; and the informal discourses of art criticism.

I do not see any immediate reason to ally the project of interesting or experimental writing on art with any of these three. The connections and debts are already in place, and it seems to me that "interesting" or "experimental" work should be trying to do something in relation to those practices, and in relation to images, that has not been done before.