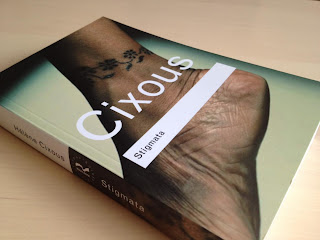 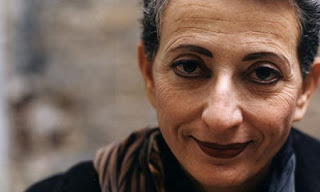 Hélène Cixous, “Bathsheba or the Interior Bible” from Stigmata

What is the best way to describe the form, the structure, of “Bathsheba or the Interior Bible”? In asking this I am aiming at another question, which is difficult to frame well without qualifying terms like structure, form, the literary, and the historical. The question I am aiming at is something like this: What is it about writing, in this essay, that is not noticed? In what sense does Cixous not notice writing?

So considering structure first: there are, initially, two sources of structure in “Bathsheba or the Interior Bible.”

Structure
First there are the 24 numbered sections, which Cixous describes as “steps in the direction of Bathsheba.” These steps have an irregular structure, in that they deviate several times from their principal subject. Steps 4, 5, and 6 are on other painters, by way of saying what the Bathsheba is not.  Steps 17, 18, and 19 take up the same theme, offering more comparisons. After Step 20, the essay is about Rembrandt's Slaughtered Ox, as a way of thinking about Bathsheba. So, following the essay's own image, this "staircase" that leads to “meditation” (section 20) is not straight. Not that it needs to be: but a reader who notes these deviations will also be thinking of themes of approach, direction, and avoidance. The idea of walking toward a painting, or walking down a staircase in order to think about a painting, is compatible with semiotic critiques by Barthes, Kristeva, and others in the 1970s who sometimes imagined visual art as a presence somehow "beyond" language, at the end of some capacity of language—something you can approach, but perhaps never actually reach.

Second, there is an ongoing ekphrastic narrative, in which Cixous takes note of things she notices. It would be possible to extract those passages from the essay and read them on their own; I think they would make a reasonably continuous narrative. She notices nudity (section 1), the dark background (section 2), Bathsheba's face (section 4), the direction of the light (section 7), the paint (section 9), the servant (section 12), the letter (section 13). There is a rhythm to these observations, which runs at a different speed than the rhythm of the numbered sections. It's as if observations are things that happen to meditations, rather than the other way around: her imagination is not driven by what she's noticed, but things she notices appear to her in writing when they coincide with her imagination. That relation between observed detail and themes is less empirical, in its way, than the essay's first source of structure (its numbered sections), because at least those go "in the direction" of the painting.

The anti-representational
In terms of logical claims, what matters in this essay is an argument against the sufficiency of naturalism. Rembrandt is praised for setting aside naturalism in favor of forms of interiority. This is the historical, logical content of the essay, and it has an interesting relation to what might be called the essay's literary interests, which are articulated around the metaphors of stigmata, pain, and death. Let me expand a little on the essay's logical claims in order to draw out the parallel with the literary concerns.

On the one hand, the claim that Rembrandt paints interiority is a standard part of his reception, one that Cixous will have known, even if she didn't get it from reading what she calls "the big catalogues" (section 24). This traditional value is clear for example when she says


That which wells up in Bathsheba, that which the letter has poured into her body, into her organs, into her brain, and which is working on her body, her face, her brow, from the inside. (section 19)

This is an idiosyncratic but fairly standard way of putting the claim about what is called psychological portraiture, which is a tradition in Western painting, a standard element of academic instruction in the Baroque (physiognomics), and a part of the Rembrandt reception since his lifetime. The soul paints emotions and thoughts on the face, and Rembrandt's skill was to have shown them there. A number of books have explored this thematic, in this case perhaps the most salient being Svetlana Alpers's Rembrandt's Enterprise: The Studio and the Market. Mieke Bal's enormous book Reading "Rembrandt" is partly about deconstructing this notion. When she expresses her disappointment that Vermeer painted "cupboards" and Holbein cared about Erasmus's appearance, she is repeating conventional terms of the appreciation of Rembrandt's psychological portraiture.

On the other hand, Cixous is also developing an anti-representational critique, which involves the claim that what is most interesting about painting is what it does not show. "Rembrandt paints the secret," she writes, "the trace of what escapes us," things "beyond the painting, beyond thought" (section 18). Some of those things are commonly noted in relation to post-Renaissance painting, such as painting "what has just happened" and "what is going to happen," but others, such as the idea of painting something "beyond thought," belong more to the late 20th century poststructuralist critique of representation. In the next essay in Stigmata, which is also the only other one about visual objects, she asks “what do we want to draw?” and answers, “it's not a question of drawing the contours, but of what escapes the contour, the secret movement, the breaking, the torment, the unexpected. The drawing wants to draw what is invisible to the naked eye” (pp. 19-20). That essay is a confessional, performative, phenomenological account of drawing, and this essay on Rembrandt brings the same interests to bear.

(It should be asked what in Cixous’s accounts is specific to painting or drawing, and what is a metaphorical or rhetorical projection of her interests in writing. For me, the few passages in the second essay that refer directly to drawing depend on their palimpsestic passages. But most drawings do not “combat themselves” in that way, and Cixous’s description of those passages is neither specific to the drawings, nor something that couldn’t be said about writing. But all that that is not my subject here.)

These are two elements of what I would call the essay's logical claims, its interest in the working of naturalism. There is an interesting parallel between those claims and the essay's literary interests in metaphors of stigmata, pain, and death. The preface to the book draws a distinction between scars (which are a residue) and stigmata (which are emptinesses), and readers will be thinking of that when they follow Cixous "in the direction of Bathsheba," that is, into the painting. That motion toward the inside is the rhetorical analogue, the figural companion, of the essay's arguments against naturalism. The question, from the perspective of writing, is how those two are connected—or if Cixous feels they need to be.

Dramatic scenes
There are some passages in which the movement of Cixous's thoughts toward interiority (Bathsheba's, the painting's, Rembrandt's, her own) produces dramatic scenes. Here is one, which opens, I note, with another staircase image:


Taking the red staircase, down to the bottom of ourselves, under the earth's crust,
This world is full of night and of golden stuff. The stuff of night is a clay. A mud. It is still moving, imperceptibly.
No landscape and no 'furniture' either. Instead of furniture, 'shelving,' 'shelves' of color. Bands, brush strokes. What do you see, there?
A man said to me, here's a cupboard. With linens piled up.
Another man, this one a painter: an architectural background, a pilaster.
A commentator said to me: the curtain has been drawn aside.
We have such a need of cupboards, of curtains, such a need to furnish.
The interior world is full of night and of golden stuff, of the stuff of night. Spools of night. (section 8)

On the surface, she is reporting what friends said when she asked them where Bathsheba and her servant are meant to be. Her friends tell her that all sorts of ordinary things are there, including the machinery of Baroque painting, pilasters and curtains. She wants to say that they refuse to notice the "clay," the "stuff," part of which turns out, in the next section, to be the "mud" with which Rembrandt painted. The background, for Cixous, is "night," interiority, David, skin, and blood: "The entire room is flesh. Sex." (section 8)

In terms of writing: this scene is a drama within the text, like a play within a play, with its own dramatis personae ("a man," "another man," "a commentator"). The kind of interiority it conjures has echoes of Beckett: it's threadbare, perhaps with a cupboard or a curtain. On the other hand the passage also has the deep golden and red tones of Gustave Moreau's interiors, and in that sense its literary precedent is also Huysmans or Lautréamont. It's a drama of blood, darkness, and sex: a very fin-de-siècle tableau.

What do these dramas do for the narrative? Are they optional flourishes or moments of pleasure in relation to the surrounding prose, or are they crucial enactments of ideas that cannot be simply listed? I don't see any places in the text that open that question, and I don't perceive it as a question Cixous is asking herself. For that reason it appears to me as a lost opportunity to make the text, and the response to the painting, more compelling. The undecided relation between the text's literary interests and its arguments is a similar case. In both, I wish that Cixous's sense of her project would have included meditation, exploration, figuration, or—in a metaphor better suited to her own book—suturing of historical argument and literary tropes, or descriptive narrative and drama.

This is the sense in which I would say Cixous does not notice writing in this essay. It is as if she is supernaturally aware of herself as a writer, playing with languages, etymologies, and narratives, but at the same time she takes her project, as a writer (and Derrida's encomium is prominently displayed: she is, for him, the best French writer of the 20th century), to be the enactment of the moment and possibilities of writing, rather than the analysis of the the kind of text that her writing has gone ahead and produced. For me, that is ultimately a reason I let myself stop reading: the text is not as reflective as it might be, despite—or, exactly, because—of the kinds of vigilant self-awareness she directs at writing in general. The text is doesn't perceive barriers or boundaries: that gives it a freedom, but it also issues a license, to readers, to stop reading carefully, to become less fully engaged in what works and what doesn't, in what's said and what isn't, and ultimately, in what is written. 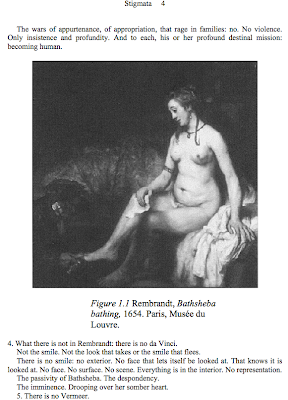 Images
The images are set with absolute indifference into the text, at least in the English edition: I haven't yet had time to compare the French. The same is true of the second essay in Stigmata, whose subject is drawing: it reproduces two images, and there is minimal interaction between images and text. 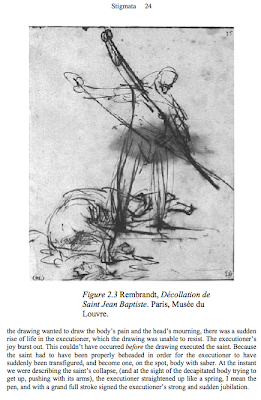 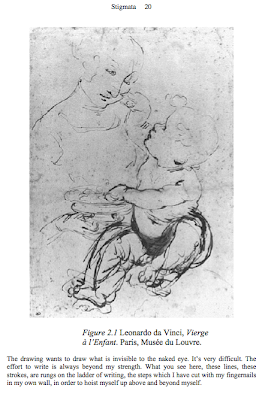